ALTHOUGH REGULATORS PLAN to keep a watchful eye, the path was cleared Thursday at the state and federal levels for a mega-merger that would create the Beth Israel Lahey Health System, which will represent the state’s second-largest care network, behind Partners HealthCare.

Attorney General Maura Healey on Thursday announced the conditions that will be placed upon the creation of Beth Israel Lahey Health System (BILH), which will be formed through the merger of Beth Israel Deaconess Medical Center and Lahey Health System. The new system will face a seven-year price cap and $71.6 million in financial commitments over eight years to support health care services for low-income and underserved communities, according to Healey’s office.

Soon after Healey announced the deal, federal regulators signaled that the agreement struck between her office and the proposed new system satisfied their concerns and that they will allow the merger to proceed.

“Today we take an important step forward in making our vision a reality. We appreciate the enormous effort that the Attorney General, her staff and the Federal Trade Commission have devoted to our proposal,” Beth Israel Deaconess CEO Kevin Tabb, who is expected to serve as CEO of the new system, said in a statement. “We share their commitment to health care innovation in Massachusetts, and we are eager to build on the strengths of our legacy organizations and deliver on our promise to our patients, their families and our communities.”

Advocates for low-income communities had opposed the merger and the state Health Policy Commission, in referring it to Healey for review in September, had cautioned that the deal would likely lead to an increase in health care costs. 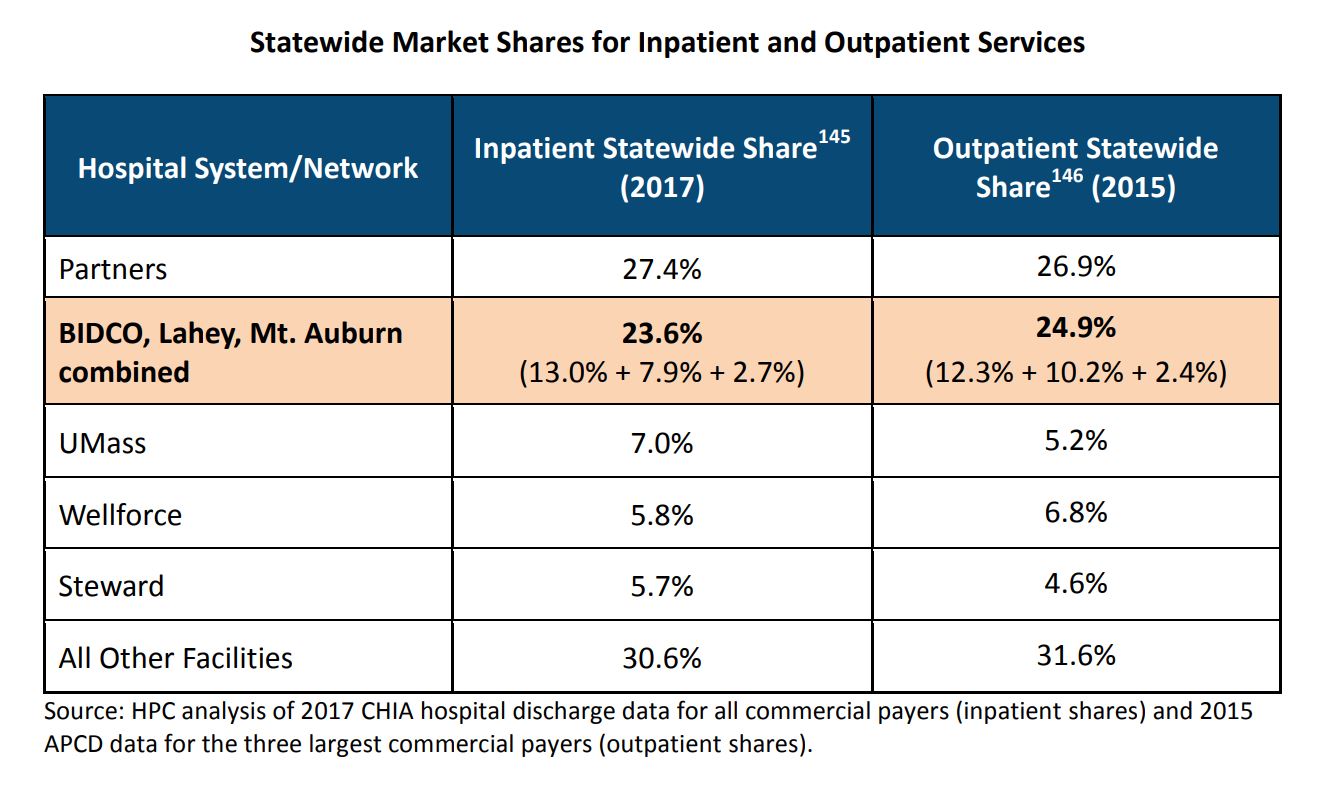 The conditions imposed by Healey, and agreed to by BILH, are intended to mitigate those concerns. Under the price cap, BILH will guarantee that its annual price increases will be below the state’s official health care cost growth benchmark, currently set at 3.1 percent. Healey’s office estimated that the seven-year cap will avoid $1 billion in cost increases, including $198 million out of a projected $230 million increase in the first year alone.

“Through this settlement, Beth Israel Lahey Health will cap its prices, strengthen safety net providers across the region, and invest in needed behavioral health services,” Healey said in a statement late Wednesday morning. “These enforceable conditions, combined with rigorous monitoring and public reporting, create the right incentives to keep care in community settings and ensure all our residents can access the high-quality health care they deserve.”

The settlement, filed in Suffolk Superior Court as an “assurance of discontinuance,” features a list of “enforceable conditions,” including a requirement that BILH strengthen its commitment to MassHealth; enhance access to mental health and substance use disorder treatment across its system, and engage in joint business planning with its safety net hospital affiliates, including Lawrence General Hospital, Cambridge Health Alliance, and Signature Brockton Hospital.

To enhance access to health care for low-income and underserved communities, BILH will be required by the agreement to spend $71.6 million over eight years, including: $41 million to support affiliated community health centers, $16.9 million to develop and expand behavioral health services across the new system and $5 million in “strategic” investment to expand access in communities of color and low-income communities.

The Make Healthcare Affordable Coalition, which has opposed the merger deal throughout the process, said Thursday it is reviewing the settlement but is concerned that it might not protect access to health care for vulnerable and low-income communities.

“We are very disappointed that, unlike the Partners/South Shore [Hospital] transaction, there is not an opportunity for the community to be heard in a public comment process,” Salem City Councilor Domingo Dominguez, a member of the coalition, said. “Given the huge impact this merger will have on so many communities, residents, elected officials, and other stakeholders have a right to be heard on the specifics of this settlement.”

The agreement requires BILH to “make a good faith effort to have all physicians and other licensed providers who are employed by BILH, and all other BILH Providers, apply to participate in MassHealth (if they are eligible for such participation) within three (3) years” and indefinitely prohibits BILH from capping the number of MassHealth patients it collectively serves.

The Federal Trade Commission issued its own statement Thursday saying that it has opted against taking enforcement action related to the proposed merger and will not stand in the way of the hospital systems coming together.

“The assessment of whether to take enforcement action was a close call. However, based on Commission staff’s work and in light of the settlement obtained by the Massachusetts AG, we have decided to close this investigation,” the agency said. “We observe that this transaction may provide a good opportunity for a retrospective study of merger effects, including the effects of efficiencies. We will continue to keep a watchful eye on this and other health care transactions and take action as appropriate.”

HPC Chairman Stuart Altman said in a statement that the agreement Healey and BILH entered, along with conditions imposed on the proposed system by the Department of Public Health, represents “a wide-ranging set of enforceable commitments designed to limit price increases, support safety net providers, and enhance access to services for underserved patients and those with behavioral health needs.”

The HPC had previously reported that the proposed merger could increase total health care spending by $128.4 million to $170.8 million annually for inpatient, outpatient, and adult primary care services.

“Moving forward, the HPC, in collaboration with DPH and the AGO, will provide substantial public oversight and accountability of this new system to ensure that it follows through on its commitments and contributes to our shared goals of reducing health care spending while improving access to high-quality care in the Commonwealth,” Altman said.

The executive vice president of 1199SEIU, Tim Foley, said in a statement that the conditions imposed by Healey’s office “are a strong effort to protect consumers from soaring costs that could result from the joining of two higher-cost health systems and the potential damage that new entity could do to quality community hospitals, patient access and the cost of care.”

“They begin to show how healthcare providers and insurers can come together for the benefit of all,” Michael Rubenstein, co-chair of the GBIO Healthcare Action Team, said in a statement.