WHILE MANY DEMOCRATS hoped she would challenge Gov. Charlie Baker, Attorney General Maura Healey is going for four more years in her current job. On Friday night, her party mates rallied around her bid to stay put at One Ashburton Place, but also responded with zeal as she took a few jabs at Baker.

“Let’s talk about Governor Baker for a moment,” Healey, on stage at the DCU Center, told party delegates who waited in silent anticipation.

“You know when I played basketball it was about standing up and taking the court, not sitting out on the sidelines,” Healey said. “It was about making the play or at least trying to, not running out the clock, not waiting for others to lead. But time and again the governor retreats to poll-tested safety rather than take on the tough fights and lead. Playing it safe Massachusetts, is not going to get the job done.”

Roads and bridges in Massachusetts are “falling apart,” Healey said. People are stuck “for hours” trying to get to work by car or commuter rail, she said, and too often the quality of education is dictated by the wealth of a student’s family.

“We know we can do better if less time was spent raising money for national Republicans and more time was spent articulating a vision for our future,” said Healey, who has not taken sides in the Democratic gubernatorial primary contest between activist Robert Massie and former Gov. Deval Patrick budget chief Jay Gonzalez.

The Baker campaign responded to Healey’s criticisms by pointing to instances where Democrats have praised his work.

“Governor Baker and Lt. Governor Polito are proud to have strong working relationships with their state and local colleagues across the aisle and an accomplished bipartisan record that continues to deliver results for the people of Massachusetts,” campaign spokesman Terry MacCormack said in a statement. 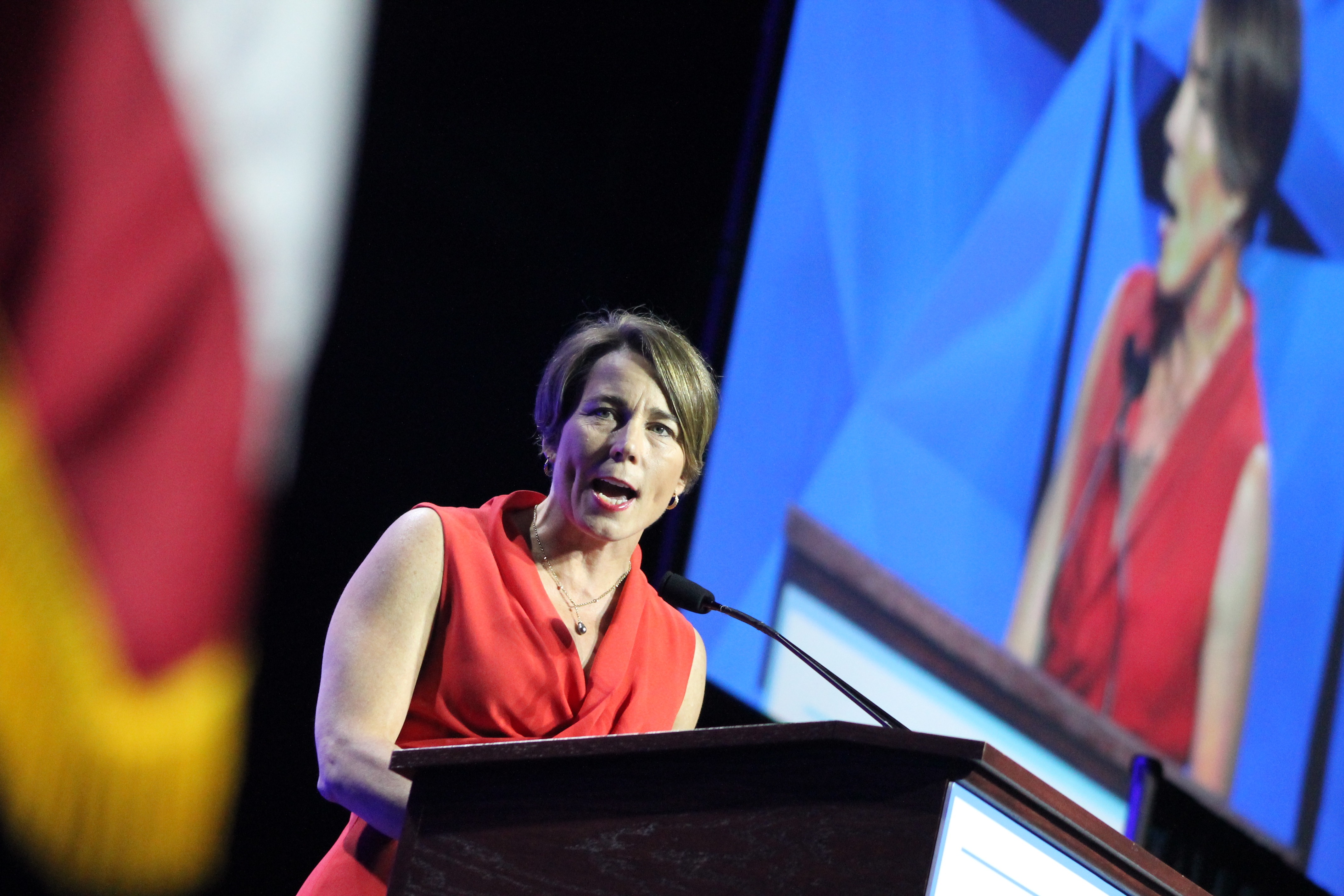 “Together folks we’re going to elect a Democratic governor in this state who is ready to lead and not just follow,” Attorney General Maura Healey told fellow Democrats Friday night. [Photo: Sam Doran/SHNS]

Boston City Councilor Lydia Edwards, who represents East Boston, Charlestown and the North End, introduced Healey as “one of the most incredible women in the country” and said they shared roots as lawyers and activists.

“We know our rights are under attack but we remain hopeful,” said Edwards. “We know we didn’t get here by accident. These are man-made problems and we need this woman to lead the solutions.”

Healey ran through her efforts to curb gun violence, address the opioid addiction crisis, hold student loan companies accountable, and investigate and sue drug companies – but won some of the loudest crowd responses when she mentioned President Donald Trump and the National Rifle Association.

“Just a few weeks ago we beat the NRA in court,” Healey said, referring to a federal judge’s decision in April to dismiss a gun lobby challenge to the state’s assault weapons ban. The crowd also roared its approval after Healey said “our leaders should always denounce Nazis and racists whether they’re marching in Charlottesville or posting on Twitter.”

Healey has sued the Trump administration “again and again,” as she put it, and gave no indication that she’ll retreat from that tactic.

“I love this job and I want to keep doing it,” said Healey, who surged onto the political scene in 2014 when she defeated former Sen. Warren Tolman to win the party’s nomination for attorney general and then cruised to election.

Bourne attorney Jay McMahon in late April won the endorsement for attorney general of the Republican Party over Dan Shores of Hingham, touting both his experience in the Massachusetts court system and an aggressive style that he contrasted with the “nice guy” persona of his GOP opponent.

McMahon, who said he has practiced in every court in Massachusetts, called Healey a “looney, liberal political activist” and said he would stop filing “frivolous lawsuits” against the Trump administration. Instead, he would focus on public corruption in Massachusetts that he accused Healey of ignoring.

Accepting the endorsement at the GOP convention, McMahon said of Healey: “We’re going to fire her.”

Both McMahon and Shores also targeted Healey for her enforcement order to crack down on the sale of banned assault weapons and copycat rifles, and McMahon promised to rescind the order on his first day in office. “All your guns are safe with me,” McMahon said.

Healey rallied delegates, challenging them to join her in supporting a constitutional amendment imposing a 4 percent surtax on household income above $1 million, opposing a ballot question repealing the transgender accommodations law, and continuing to address opioid addiction and gun violence.

She said, “Donald Trump is a symptom and we need to treat the disease. It’s on us to be that cure.”